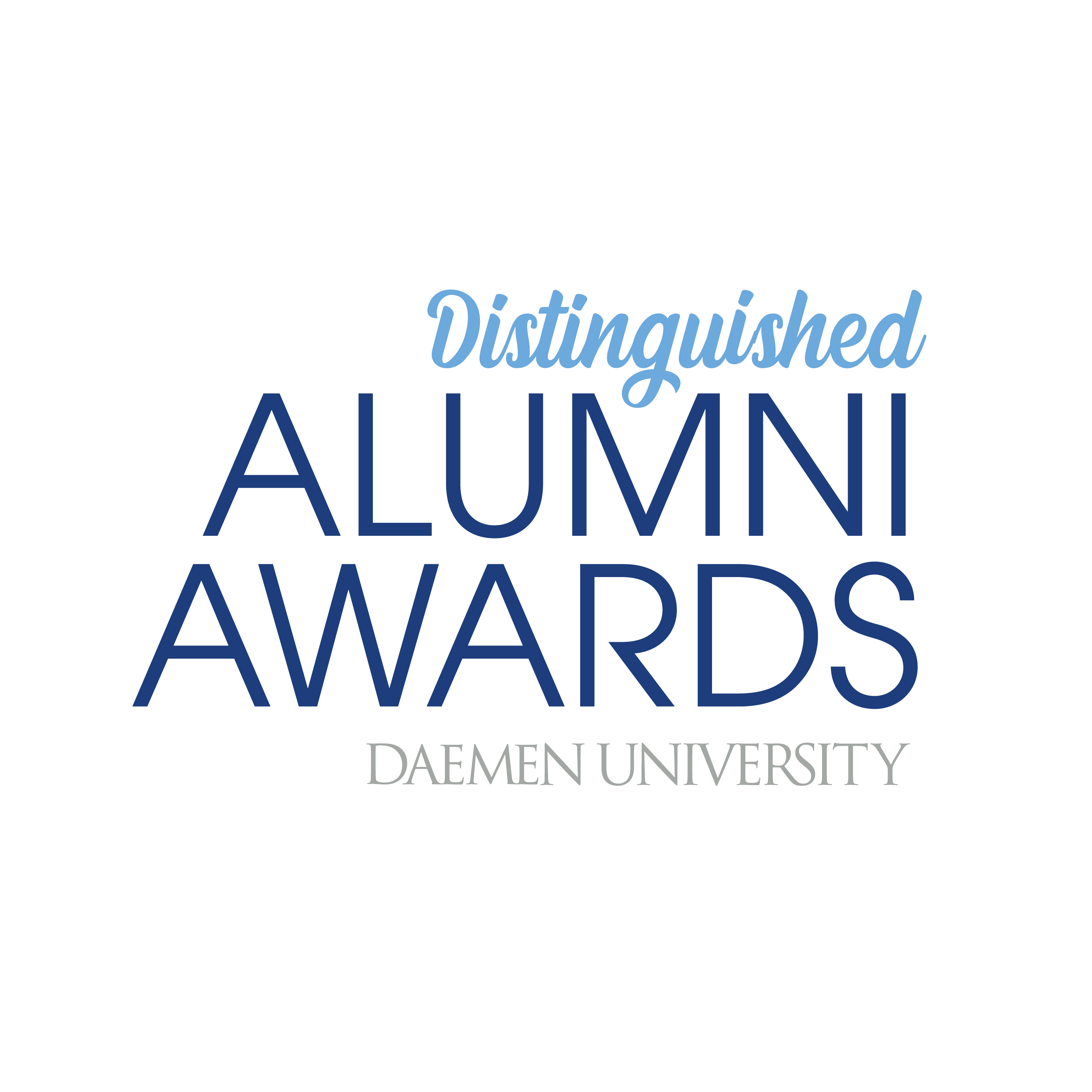 The Daemen Distinguished Alumni Awards return in 2022 as an in-person ceremony honoring six accomplished graduates – including a special 75th-anniversary-inspired Diamond Anniversary Distinguished Alum Award, to be given to Nancy Gacioch, ‘62.

The presentation ceremony will be held in the Wick Social Room at 6 p.m., on Sept. 29. Registration for the event is now open.

An annual tradition now in its 36th year, the Distinguished Alumni Awards recognize the achievements, growth, and societal contributions of the university’s outstanding alumni.

Award recipients, who are selected by the National Alumni Board of Governors, exhibit the ideals expressed by the institution’s founders and that remain strong at Daemen.

This year’s Distinguished Alumni Award honoree is Phylicia Dove, ‘15. The award – presented by Daemen President Gary Olson – recognizes a graduate who has achieved distinction in their career and in the community and has shown outstanding dedication to the university.

Co-chair of Daemen’s largest-ever comprehensive capital campaign, the Drive to 75, Gacioch  is a philanthropist, business owner, and a dedicated, long-time supporter of many Western New York charitable organizations.

The Class of 1962 alum is also the namesake of the Haberman Gacioch Visual & Performing Arts Center, which serves as a valuable exhibit space for Daemen students and alumni, and the Nancy Haberman Gacioch Center for Veterans, which welcomes students who are active or retired members of the military as well as student dependents of military service members.

As a former teacher, Gacioch has led significant initiatives to promote women in business entrepreneurship, including support to start and maintain Daemen’s interdisciplinary minor in entrepreneurship, and an accompanying lecture series. She also provided funding for a new scholarship, the Nancy Haberman Gacioch Endowed Scholarship for Women, which is needs-based and primarily for WNY residents. As a further benefit to innovation, she established the Entrepreneurship Program Professorship.

Gacioch was honored in 2004 with Daemen’s Outstanding Service to Community award. She earned a bachelor’s degree in history with a minor in economics from Rosary Hill College.

As the grant quality manager for Evergreen Health – a non-profit primary and special health care facility serving Western New York – Christina Parker taps into her passion for working with women from underserved populations and communities of color.

Her drive for working with these communities was developed through her studies on the impact of socially stigmatized illnesses such as HIV, mental illnesses, and substance use within these populations.

Parker earned a bachelor of science degree from Daemen in health care studies, with a concentration in community health. She also earned a master of arts degree in psychology from Medaille University.

Christina also works as an adjunct instructor for the Master’s in Public Health program at Daemen, teaching courses on program assessment, planning, implementation and evaluation.

Parker resides in Buffalo, with her husband, Stephon, and daughter, Stephanie.

A Brooklyn native, Phylicia moved to Buffalo shortly after graduating from the Hobart and William Smith Colleges and later earned a Master of Science from Daemen.

Creative Director and owner of IamPhyNomenal LLC, a fashion company (from which her shop, Black Monarchy, was born), Phylicia is a lifestyle image consultant and personal shopper – and has worked with many of Western New York’s notable public figures. She has also styled the cover of local magazine Black WNY and hosted styling specials on News Channel 4 WIVB-CBS.

Founded in 2016, Black Monarchy “embodies culture, language, and is a symbolism for a monarch for kings and queens to reign. This mantra details the importance of celebrating diversity in our globalist society,” as Dove described.

The shop draws inspiration from architectural and cultural textiles, celebrating the uniqueness of global diasporas. The boutique curates the vividness of cultural clothing and jewelry made of raw authentic materials and authentic fabrics. Black Monarchy was a 2017 winner of 43North’s “The Pitch” competition.

Dove has also mentored and taught students in the Leadership & Innovation Department for many years and was a featured speaker at the university’s second annual Black Excellence Gala in 2022.

Passionate about volunteerism and economic development, Kwanzaa has volunteered with several nonprofit organizations, including serving on the board of directors for the Sisters Hospital Foundation and the Ralph C Wilson Jr. Foundation’s program committee. She is a member of Delta Sigma Theta Sorority, and The Links, Inc.

Kawanza was named to Buffalo Business First’s Power 200 Women and has also been recognized as a Woman of Influence, a 40 under 40 recipient, and a Black Achiever in Industry by the publication.

Kawanza has more than 20 years of experience in the banking industry, including a stint as senior vice president of corporate responsibility of KeyBank’s eastern division. She also held several leadership positions at HSBC, after completing the organization’s Executive Development Program.

She earned a bachelor’s degree in English/African American Studies from the University of Buffalo and a master’s degree in executive leadership and change from then-Daemen College. She is a Phi Beta Kappa.

Kawanza currently resides in Jacksonville, FL with her son, Chadwick.

Randy Gerlach is the president and CEO of SchofieldCare.

Gerlach has over 30 years of experience in healthcare management and nursing home operations throughout New York. He is the vice-chair of the New York State Health Facilities Association and has served as president of the Western New York district 10 for more than five years.

Gerlach is known for making a positive impact in the lives of seniors, and he has earned a reputation for his extensive knowledge and leadership in long-term and post-acute care.

His organization, Schofield, earned a five-star rating from Medicare.gov in 2019.

Gerlach honors the memory of his daughter, Ali, through Ali’s Rally Foundation, which he founded. Since its inception, it has raised over $350,000 for ConnectLife (formerly UNYTS). Those funds are specifically designated towards ConnectLife’s Donate Life program, a school outreach program with the objective of continuing to make Western New York aware of the need for organ donation.

Hammer graduated from Daemen with a BFA in painting and from Canisius College with a master’s in college student personnel administration. Serving in alumni relations at Daemen from 2008 until 2022, Hammer remains dedicated to alumni and student engagement. She founded the Tradition Keeper Medal Program awarding students during commencement ceremonies. She established the archive, which includes 1,000 memorabilia pieces.

Hammer is a founding member of the Daemen VPA 2021 initiative EMERGENCE: A Celebration of Emerging Artists. Her artwork has been featured in various establishments, most notably the Town of Tonawanda Courthouse mural.

She resides in Lancaster, N.Y., with her husband, fellow alumnus, Brian ‘02, and children Audrey and Natalie.

Read more about the history of the award and nominate a deserving graduate for the 2023 awards. Last year’s ceremony can be viewed here.