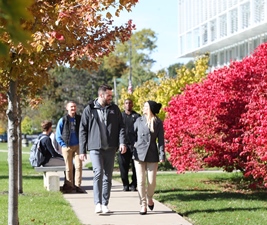 “To be selected once again for this prominent national ranking is a tribute to our first-rate faculty and illustrates our commitment to academic excellence and student success,” said Daemen President Gary Olson. “We are moving ahead with initiatives that will help propel Daemen to even greater heights in the future.”

Daemen is one of only three private colleges in the Buffalo Niagara region named to the 2021 WSJ/THE College Rankings list, which includes nearly 800 of the best colleges and universities across the country.

In addition to 15 individual performance indicators, the rankings examine four key areas: resources (30 percent), engagement (20 percent), outcomes (40 percent), and environment (10 percent). In the 2021 rankings, Daemen excelled for the fourth time in the area of engagement, a pillar that measures student interaction with teachers, student recommendations for the college, overall student engagement, and the number of accredited programs.

According to WSJ/THE, “the college rankings are a pioneering ranking of U.S. colleges and universities that puts student success and learning at its heart. The rankings include clear performance indicators designed to answer the questions that matter most to students and their families when making one of the most important decisions of their lives – who to trust with their education.”

The WSJ/THE College Ranking for Daemen is the third national ranking the college has recently earned. For the second consecutive year, Daemen has been ranked among the best universities in the country in U.S. News and World Report’s prestigious Best Colleges rankings, and Money magazine has ranked Daemen as one of the 2020 Best Colleges in America for educational quality, affordability, and student outcomes.