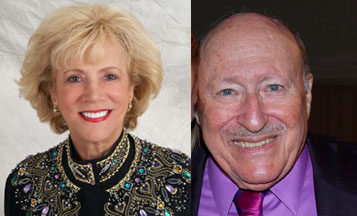 AMHERST, N.Y. – Author Paulette Cooper Noble, best known for her activism against the Church of Scientology, and television producer Paul Noble will be keynote speakers at the 17th annual Daemen College Academic Festival set for April 12.

The 2017 Academic Festival will open the evening prior to the full day of activities with Cooper Noble’s lecture, “The Hidden Child Who Took on Scientology,” at 7 p.m. April 11 in the Wick Campus Center Alumni Lounge.

The award-winning author is widely known for her book “The Scandal of Scientology,” a critical exposé about the Church of Scientology that subsequently led to years of harassment by Scientologists.

Cooper Noble has authored 23 books on a range of topics, including criminology, cults and travel, and more than 1,000 articles. She has received the Conscience-in-Media Award from the American Society of Journalists and Authors, Edgar Allen Poe Award, and several other honors.

On April 12, Paul Noble will present his lecture, “Television and How It Changed Our World,” at 11 a.m. in Daemen’s Research and Information Commons Room 120.

During his nearly 45 years in television, he produced shows with such notables as Eleanor Roosevelt and Dr. Ruth Westheimer, and has worked with President John F. Kennedy, Henry Kissinger, Matt Lauer, and others. He is former vice president at Lifetime TV and previously worked at Fox TV and Metromedia Television.

Both Academic Festival lectures are free and open to the public. In addition to the Daemen Office of Academic Affairs, lecture co-sponsors are the departments of English, History and Political Science, Philosophy and Religious Studies, and Visual and Performing Arts, and the Entrepreneurship Program.