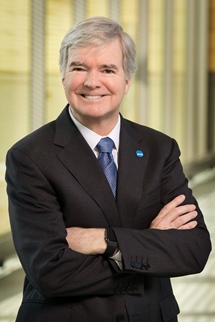 AMHERST, N.Y. – NCAA President Mark Emmert, one of the most influential leaders in U.S. higher education and a long-time advocate for student academic success, will deliver the address at Daemen College’s 69th annual undergraduate commencement ceremony on May 16.

Emmert will receive an honorary doctorate of humane letters at the ceremony, which will take place at noon in Kleinhans Music Hall at 3 Symphony Circle in Buffalo.

“We are incredibly honored to have such a nationally renowned, highly respected leader as this year’s undergraduate commencement speaker,” said Daemen President Gary Olson, who served on the NCAA Board of Governors. “We look forward to having Dr. Emmert join us in celebrating our graduating students.”

Emmert has distinguished himself as one of the most preeminent leaders in higher education today, and his insight, vision, and tireless efforts for students throughout the country will serve as a powerful example and inspiration for the graduating students.

Appointed NCAA president in 2010, Emmert oversees a vast organization comprised of nearly 1,100 colleges and universities, close to half a million college athletes, and more than 19,800 teams. He has championed greater support for student-athlete wellness and academic success, and he has ushered in a new governance structure in Division I.

His commitment to academic success, well-being, and fairness has resulted in several key initiatives, including the NCAA Sport Science Institute, Commission on College Basketball, and increasing student engagement throughout the governance process.

Prior to the NCAA, Emmert served as president of his alma mater, the University of Washington, where he holds the title of president emeritus. During his tenure, the university became second among all public and private institutions in research funding, totaling $1.3 billion in annual grants and contracts. The university also completed a $2.6 billion fundraising campaign under his leadership.

A life member of the Council on Foreign Relations, Emmert is former chair of the executive group of the Worldwide Universities Network and has served on the National Security Higher Education Advisory Board, among others. He is a fellow of the National Academy of Public Administration and a past American Council on Education Fellow and J.W. Fulbright Administrative Fellow.