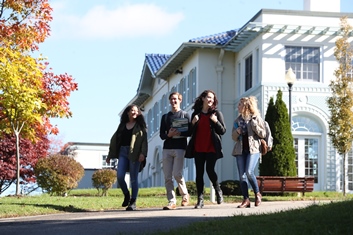 AMHERST, N.Y. – Daemen College has been named among the nation’s best universities in the 2020 U.S. News and World Report Best Colleges rankings, making this the first time ever Daemen has been included on the national universities list.

“We are proud to have U.S. News recognize Daemen as one of the best universities in the country,” said Daemen President Gary Olson. “Our growing national prominence is a testament to the great momentum our college is experiencing and reflects our academic excellence, world-class faculty, and the student-centered experience that we provide to prepare students for future professional success.”

Daemen is also ranked No. 56 (tied) among national universities in the new social mobility category, a listing that measures how well schools graduate students who have received federal Pell Grants. On the newly created list, Daemen comes in at No. 7 among national universities in New York State and is one of only two private institutions in Western New York in the social mobility category.

In another category, U. S. News lists Daemen as an A+ plus school for B students, which is based on the college’s performance in the 2020 rankings and the average freshman retention rate.

Now in its 35th year, the U.S. News Best Colleges rankings compare institutions from the across the U.S. based on 15 measures of academic quality. Rankings are based on graduation and retention rates (35 percent); faculty resources (20 percent), which includes class size, salary, proportion of full-time faculty, proportion of faculty with the highest degree in their field, and student-faculty ratio; expert opinion (20 percent), which is pulled from various surveys and studies; financial resources (10 percent); student excellence (10 percent), which includes standardized test scores and high school standing; and alumni giving (5 percent).