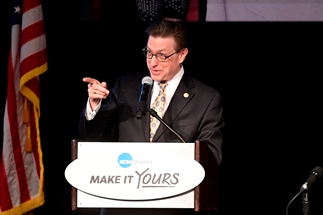 AMHERST, N.Y. – Daemen College President Gary Olson, Daemen Board Chair John Yurtchuk, and several college trustees have been named to the 2020 Buffalo Business First Power 250, an annual ranking of the most influential leaders in the Buffalo Niagara region.

“We extend our sincerest congratulations to President Olson, Chairman Yurtchuk, and our esteemed trustees for receiving this great honor,” said Board Vice Chair Paul Saffrin. “Their outstanding leadership and vision have been instrumental in advancing our region at a time when Western New York is experiencing tremendous growth and transformation.”

Local leaders from a range of organizations and industries in the region are included on the Power 250 list. This year Olson is ranked No. 100, a significant increase from No. 121 on the previous list. Daemen board chair John Yurtchuk, trustees Scott Friedman, Candace Johnson, and Arthur Wingerter, and trustee emeritus Peter Hunt have also been named to the eighth annual list.

The Power 250 recognizes individuals who live and work in Western New York and are considered as those who “wield the most clout in the eight-county” region. Business First reporters and editors nominate individuals for the list, and rankings are based on extensive research and in-house discussions.

“Influence means different things to different people, but most of us will agree on this – we all know power and influence when we see it,” said Donna Collins, managing editor at Business First.