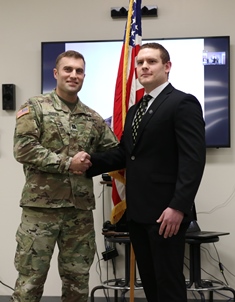 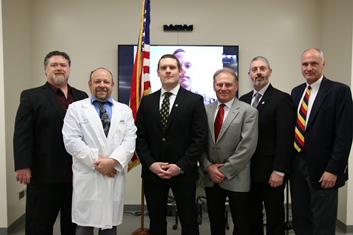 AMHERST, N.Y. – Daemen College alumnus Dr. Sean Christie ’15, ’17, one of only nine practicing physical therapists in the country selected for entry this year into the U.S. Army, was officially sworn in as a commissioned officer at a ceremony held Dec. 6 on Daemen’s campus. Entering the Army at the rank of captain, he will attend officer school in San Antonio, Texas, before reporting to his duty station.

As a commissioned medical officer and physical therapist in the Army Medical Department, Christie will be responsible for leading enlisted soldiers and provide treatment in the areas of physical fitness, physical training, and injury prevention.

“Since graduating from Daemen, I have had several opportunities to develop as a clinician, educator, and researcher, and I feel well prepared to meet all the responsibilities as a medical officer with utmost professionalism and expertise,” said Christie. “I am truly honored to be commissioned as an officer and will serve my country to the best of my ability.”

The commissioned officer oath ceremony for Christie was conducted by Captain Travis Joseph. In addition to family in attendance, Christie’s cousin, Army Captain Eric Stormer, viewed the ceremony via video conferencing from South Korea, where he is stationed as a military police officer.

Christie earned a bachelor’s degree in natural science and a doctor of physical therapy from Daemen and is currently pursuing a doctorate in health science from Rocky Mountain University of Health Professions. After graduating from Daemen, he worked in an outpatient orthopedic and sports physical therapy practice and held a per diem position at an inpatient rehabilitation facility. He also taught continuing education courses for physical therapists.

“I’m thrilled that Sean has chosen the path of service to our nation as a captain in the U.S. Army and extend sincerest congratulations to him for being commissioned as an officer,” said Styn, who has been a mentor to Christie since he was a student at Daemen. “Sean exemplifies the highest level of professional excellence and his intellect, motivation, and dedication to the physical therapy field will make him an outstanding leader in his new role in the military.”

Christie, who resides in Erie, Pa., credits Daemen and his mentor with nurturing his success. “The world-class education I received at Daemen and the wonderful mentoring that Dr. Styn has provided have enabled me to achieve all that I have as a student and a physical therapy practitioner,” said Christie. “Being commissioned as an officer in the Army is a great milestone for me, and I look forward to the many opportunities that will be available serving in the military.”