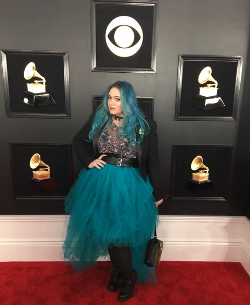 LOS ANGELES -- Daemen College graduate Annie Stoll ’08 received a 2019 Grammy Award for Best Boxed or Special Limited Edition Package for her work on “Squeeze Box: The Complete Works of Weird Al Yankovic.” The award was presented at the nationally televised Grammy Awards held on Feb. 10 at the Staples Center in Los Angeles.

Stoll shared the award for art direction with Meghan Foley and Yankovic, a comedian and singer-songwriter known for his parodies, who earned his fifth Grammy. Their win bested fellow nominees that included Guns N’ Roses and the Grateful Dead.

“I was so honored to work with Al, Meg, and the rest of the team on this project,” said Stoll. “It was an amazing night at the Grammys and an experience I will never forget.”

Stoll, who earned a dual bachelor of fine arts degree in graphic design and illustration from Daemen, is art director at Sony Music Entertainment. Her design talents may be seen on various CD and music packaging she has worked on for groups and artists at SONY, including Pentatonix, David Gilmour, Superfruit, Lo Moon, Barbra Streisand, Adele, and Pearl Jam, among many others.

Stoll has also completed an anthology, “1001 Knights,” a three-volume set of books featuring the creative work and talent of more than 260 artists.

A native of Western New York, she resides in New York City.