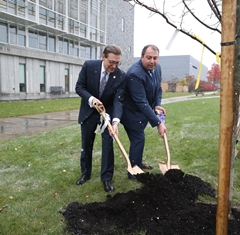 AMHERST, N.Y. – Daemen College and the Town of Amherst have announced a major college-town partnership with the ambitious goal of planting 1 million trees across town, an initiative that has been launched with the first 22 of the new trees planted on the college’s Main Street campus.

The new collaboration was officially kicked off by Daemen President Gary Olson and Amherst Supervisor Brian Kulpa at a ceremonial tree planting held on campus on Nov. 7. Joining in support of the tree planting effort were representatives from the Sierra Club, Daemen Environmental Club, Amherst Conservation Advisory Council, University at Buffalo Sikh Student Association, and the Amherst and Williamsville Environmental Alliance.

Daemen’s lead contribution to Amherst’s five-year initiative is being done jointly with the college’s new “22 for 22” campaign aimed at planting 22 new mature trees  on campus. The college’s tree fundraising endeavor will support the $22 million goal for the Drive to 75, the college’s first-ever comprehensive campaign, which will be completed in 2022, the year the college will celebrate its 75th anniversary.

“For more than 70 years, Daemen has been a key part of the Amherst community, and we are proud to be a lead contributor to this town-led effort,” said Olson. “The college has a longstanding commitment to sustainability, and this tree planting program will not only further the college’s comprehensive campaign but it will advance Amherst’s efforts in urban forestry throughout the town.”

Kulpa said, “I am honored to partner with President Olson and Daemen College on the launch of their ‘22 for 22’ campaign and thank the college for joining us in our efforts to re-green Amherst, which is a priority for our town. Adding mature trees to Daemen’s campus will enhance the beauty and quality of life in Amherst and the surrounding neighborhoods. I applaud the college’s commitment to the environment and to our town.”

Through Amherst’s efforts, the town will replant portions of parks and re-tree neighborhoods that have lost their tree canopies over the years, including along Niagara Falls Boulevard and Maple Road. The town has committed $100,000 in the 2020 budget to finish Amherst’s tree inventory and the town will work with various local organizations to encourage private investment in the planting effort.

“To help make our effort a great success, we will look to the Sierra Club, Audubon Society, and Re-Tree Western New York for their leadership, guidance, and commitment to urban forestry in Amherst,” said Kulpa. “We are also calling on residents, developers, and property managers to participate in our town-wide effort to re-green Amherst. “

Trees for Daemen’s “22 for 22” initiative have been planted on the front campus lawn. Donors who support the college’s tree campaign will have the opportunity to include a commemorative paver stone in honor of a family member or friend.

To start the “22 for 22” campaign, Supervisor Kulpa committed to purchasing the first tree, with the next two trees purchased by John Yurtchuk, chair of the Daemen Board of Trustees, and President Olson and his wife, Dr. Lynn Worsham.

“Daemen’s new tree campaign follows a previous highly successful effort that led to the planting of 200 new trees that have transformed the overall look and feel of our campus,” said Olson. “As we prepare to launch this next initiative, it brings together the bold vision of our college and Amherst to create new tree canopies that will help shape beautiful, high-quality green space in our neighborhoods.”