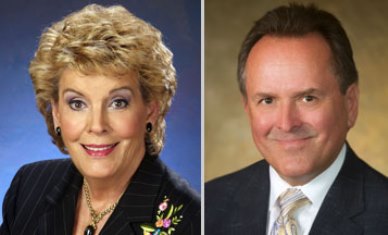 AMHERST, N.Y. – Yvonne S. Boice, a prominent businesswoman and philanthropist, and John R. Yurtchuk, chairman and owner of Calspan Corp., will address the Class of 2016 at Daemen College’s commencement ceremonies taking place on May 21 in Kleinhans Music Hall.

Boice will give the commencement address at the undergraduate ceremony schedule for 2:30 p.m., and Yurtchuk will speak at the 7 p.m. graduate ceremony.  Each speaker will also receive an honorary doctorate of humane letters from Daemen during the college’s 65th annual commencement ceremonies.

A long-time supporter of the arts, Boice serves as vice president of the Trust for the National Endowment for the Humanities and is chair emeritus of the Palm Beach International Film Festival. She has also given her time and talents to the boards of Lynn University and the Boca Raton Historical Society and Museum, among others, and serves on the Florida Film and Entertainment Advisory Council.

Boice has been recognized with many accolades, including the Outstanding Philanthropist Award from the Association of Fundraising Professionals, Palm Beach Chapter and the President’s Call to Service Award in honor of more than 4,000 hours of community volunteer service.

She has represented the United States at several high-profile women’s international business conferences and has been a featured presenter for various organizations.

A New Jersey native, Boice earned a bachelor’s degree in marketing from New York University. She is married to attorney Al Zucaro, founder of the World Trade Center Palm Beach.

Yurtchuk is chairman and owner of Calspan Corp., an industry leader in flight control, test pilot training, and a range of transportation testing and research in the U.S. and internationally. Acquiring Calspan in 2005 with Louis Knotts, he was also the developer of the company’s state-of-the-art flight research facility in Niagara Falls.

In addition his leadership at Calspan, Yurtchuk is founder of Matrix Development Corp. and is a real estate developer. He has developed, financed, and constructed space worth more than $300 million in Western New York, the New York metropolitan area, and Florida. He currently owns more than 1.4 million-square-feet of commercial, medical and research space in the Buffalo Niagara region.

Active in the WNY community, Yurtchuk serves on the boards of Daemen, Albright-Knox Art Gallery, Buffalo Philharmonic Orchestra, and Eyes Across America, and is past chair of the American Red Cross Western New York Chapter.

He earned both master’s and bachelor’s degrees in economics from the University at Buffalo, and is completing his coursework toward a Ph.D.