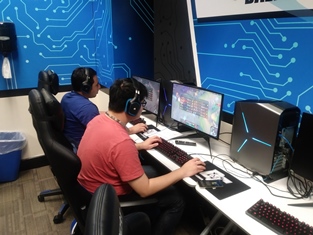 The Daemen esports team and fellow conference member New York Tech, the defending ECC League of Legends champion, posted a 4-0 record against the PBC in the tournament.

“Under the direction of coach Patrick Ryan, Daemen esports continues to be a model for excellence in Western New York and beyond,” said Dr. Greg Nayor, vice president for strategic initiatives. “Our collegiate esports program, which includes state-of-the-art Alienware computers and peripherals, enhances the robust student experience that we provide at Daemen.”

For the event, Daemen was joined by New York Tech, Molloy College, and Southern New Hampshire University in representing the ECC, with Augusta University, Hawaii Pacific University, University of Montevallo, and Young Harris College competing for the Peach Belt.

“We are glad to be able to continue this great event with our friends in the Peach Belt Conference,” said Dr. Robert Dranoff, ECC Commissioner. “Last year we had three schools on each side participating and this year we moved it to four. We think this is a very positive experience for all our team members and hope the event continues to grow in the future and perhaps expand it to other conferences as well.”

The ECC hosted its first regular season competition last spring, which culminated in their first Esports League of Legends championships. In 2017-18, the PBC was the first NCAA conference to hold an esports championship that is handled the same as other intercollegiate offerings.

Daemen’s esports program offers scholarships to qualified students, who have 24/7 access to a new esports lab in the Wick Campus Center.

Collegiate esports is one of the fast growing programs on college campuses. According to industry analyst Newzoo, the global number of esports enthusiasts is expected to grow to more than 201 million this year.