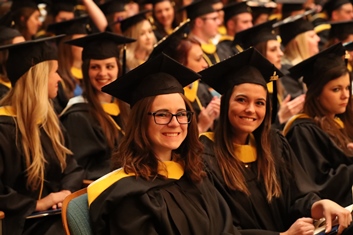 Graduating class expected to be largest in college’s history

AMHERST, N.Y. – Daemen College President Gary Olson will confer degrees to more than 1,030 undergraduate and graduate candidates in the Class of 2019 at Daemen’s 68th annual commencement taking place on May 18 at Kleinhans Music Hall. This is expected to be largest graduating class in the college’s 72-year history.

The undergraduate ceremony will begin at noon and will include the presentation of the Charles Lumsden Award, the college’s most prestigious academic award presented to the Daemen student with the highest GPA throughout their undergraduate years. This year’s graduate ceremony at 4:30 p.m. will include the first graduating class in applied behavior analysis, a master’s-level program launched by the college in 2017.

Autry O.V. “Pete” DeBusk, owner and chairman of DeRoyal Industries, Inc., will deliver the commencement address at the undergraduate ceremony.

As owner and chairman of DeRoyal Industries, DeBusk oversees a company that manufactures, markets, and sells healthcare products worldwide. DeRoyal, which is headquartered in Tennessee with facilities in six countries, manufactures more than 30,000 different medical and surgical products, and has over 2,000 employees.

Active in the community, DeBusk is chairman of the Lincoln Memorial University (LMU) Board of Trustees and founder of Halls/Powell Boys and Girls Club in Knoxville, Tenn., and has previously served on other boards. He has received numerous honors and awards throughout his career, including the Distinguished Service to Agriculture Award, the Knox Heritage Ronald E. Childress Award for Preservationist of the Year, and the East Tennessean of the Year Award, among numerous other accolades.

For the graduate ceremony, the commencement address will be given by Catherine M. Campbell ’84, CEO of Envolve Maryland, an affiliate of Centene Corporation.

In her role as CEO of Envolve Maryland, Campbell is responsible for full health plan operations and financial performance. She previously served as regional vice president at Centene, a multi-national health care enterprise that provides services to government-sponsored and commercial health care programs, focusing on underinsured and uninsured individuals.

Campbell earned a bachelor’s degree in business administration with a specialization in accounting from Daemen. She currently serves on the Daemen Board of Trustees and on various boards and committees in the community. She is a past recipient of Daemen’s Distinguished Alumna Award and was honored by Buffalo Business First with a Women of Influence award.

In addition to her degree from Daemen, Campbell received an executive MBA from the University at Buffalo and completed the Executive Leadership Program offered by America’s Health Insurance Plans.

Both the undergraduate and graduate ceremonies will be streamed live at www.daemen.edu/commencement.