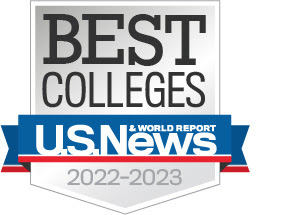 AMHERST, N.Y. – For the fourth consecutive year, Daemen University has been ranked among the top institutions of higher learning in the country, earning a spot on the U.S. News and World Report 2022-23 Best National Universities list.

Daemen is one of only three institutions in the Buffalo-Niagara region to be included on the National Universities list—and one of only 28 ranked in New York State.

Daemen also earned a spot on the U.S. News and World Report 2022-23 Top Performers on Social Mobility list, which is based on the extent schools enroll and graduate students who receive federal Pell Grants. Ranking among the top 11 percent of all colleges and universities in the country in this category, Daemen shares its ranking with Arizona State University, Ball State University, Drexel University and Tennessee Tech and others.

“Daemen is increasingly becoming known as a university that competes on the national stage with our academic programs, faculty research and student success,” said Gary Olson, president of Daemen. “Our inclusion among the country’s top institutions of higher learning is another testament to the excellence Daemen strives for every day.”

The 38th edition of the U.S. News and World Report’s rankings evaluated more than 1,500 U.S. bachelor's degree-granting institutions on 17 measures of academic quality.