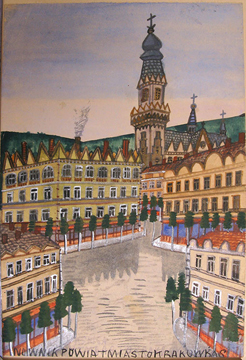 AMHERST, N.Y.  – An exhibit featuring 50 watercolors by Nikifor, an internationally acclaimed naïve (primitive) painter, will be on display at Daemen College, which will be the first venue of a three-city U.S. tour of the artist’s remarkable works.

An opening reception will be held from 5 to 7 p.m. Sept. 10 in Daemen’s Peter and Elizabeth C. Tower Gallery in the Haberman Gacioch Arts Center, where the exhibit will be on display through Oct. 2. The three-city tour of the exhibit will also include Chicago and Springfield, Mo.

In his lifetime, Nikifor (also known as Epifaniy Drovnyak, Epifaniusz Drowniak or Nikifor Krynicki), from the spa town of Krynica in the Lemko region of southeastern Poland, painted more than 40,000 pictures on sheets of paper, pages of notebooks, cigarette cartons, and even on scraps of paper glued together. Orthodox and Catholic churches, landscapes and self-portraits were the greatest sources of inspiration for his many works.

The exhibit, which is being presented by the Daemen Polish Studies Program and the Visual and Performing Arts Department, is being sponsored by Collegiate Village with additional support provided by the Polish Arts Club of Buffalo.

In conjunction with the exhibit, Daemen’s Sister Jeanne File Art History Memorial Lecture Series will open with the film “My Nikifor,” which will be shown immediately following the Sept. 10 opening reception at 7:30 p.m. in the International Center for Excellence in Animation (ICEA) in the Tri Main Center at 2495 Main St., Buffalo.

The lecture series is named in honor of Sister Jeanne File, OSF, an art historian and internationally known calligrapher and one of seven Sisters of St. Francis who founded Rosary Hill College (now Daemen College) in 1947.

All events are free and open to the public. Gallery hours are from 9 a.m. to 5 p.m. Monday through Friday. The gallery is located on Daemen’s campus at 4380 Main St., Amherst.