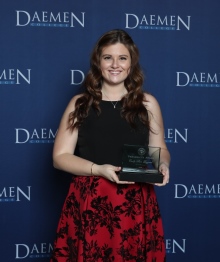 AMHERST, N.Y. –- The exceptional achievements of graduating students in the Daemen College Class of 2018 were recognized at the annual Excellence Awards Ceremony held on May 18 as part of the college’s commencement weekend activities.

“This annual ceremony is a longstanding Daemen tradition to celebrate our highest-achieving graduating students who have excelled academically and contributed so much to our college community,” said Daemen President Gary Olson.

Departmental award winners for 2018 are: