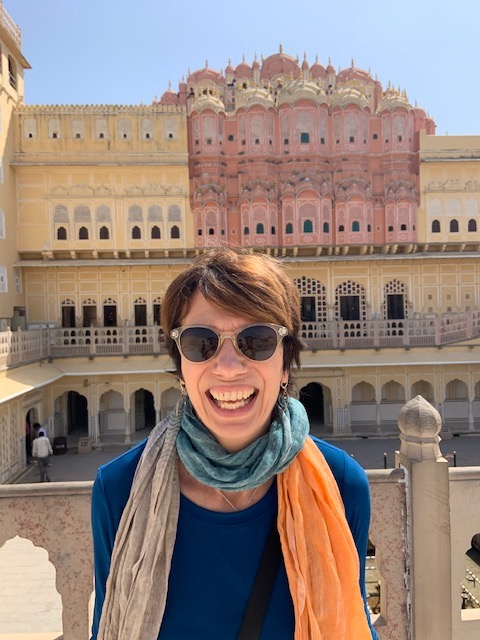 Margaret Phillips, during a previous trip to India, 2020

Margaret Phillips has received a Fulbright U.S. Scholar Award to teach and conduct research at the National Law University Delhi and the Human Rights Law Network in India in 2023.

The Fulbright Program is the U.S. government’s flagship international educational exchange program, with the U.S. Department of State and the Fulbright Foreign Scholarship Board selecting candidates using a rigorous peer-reviewed process.

Only 400 of the competitive fellowships are awarded each year and provide unique opportunities for scholars to teach and conduct research abroad.

Phillips joins a select group of Daemen faculty who have become a Fulbright U.S. Scholar, with only four professors having earned the distinction previously in the institution’s 75 years.

Phillips—chair of Paralegal Studies at Daemen and an associate professor in the department—will be working on a “Paralegals and Equal Access to Justice” research and teaching project with National Law University at Delhi and Human Rights Legal Network.

She will collaborate with the clinical program at NLU Delhi and the Human Rights Law Network’s staff attorneys to increase training and curriculum for law students and paralegals working on human rights cases.

She will also conduct research about examining the role that paralegals can play in the United States to increase access to justice. According to a 2016 report from the American Bar Association—the leading not-for-profit organization that accredits law schools and has approved Daemen’s Paralegal Studies program—around 80 percent of civil legal needs of the poor and middle-class went unmet.

“Access to justice means providing paths for middle- and lower-income individuals to receive help in resolving legal needs—and availing them of what their resources are,” said Phillips.

“Think of a legal clinic like a doctor’s clinic. With a legal clinic, someone who is underserved can come in and receive help with legal matters.”

The arrangement will also draw on Phillips’s established relationship with the Human Rights Law Network, which is interested in working with more students to educate communities about their legal rights.

In India, law students can become deputized paralegals and often work in rural communities to help with legal matters.

“What’s interesting is that globally, paralegals are seen in a much different light than they are in the U.S.,” said Phillips. “Abroad, in India and other countries, they are seen as a vehicle for bringing legal rights to the poor and disenfranchised, while in the U.S., their role is more limited partly due to the proscription against giving legal advice.”

Phillips is currently collaborating with NLU Delhi law faculty to study and compare access to justice and the role of paralegals during the COVID pandemic.

“I am very grateful to Provost Brogan for his leadership and support of this project,” said Phillips. “This award is a result of Daemen’s mission to increase global engagement and the Global Education Task Force, which supported my trip to India in March of 2020 to establish relationships with Indian lawyers, academics, scholars and activists.”

Paralegal Studies was recently ranked as the No. 21 program of its kind in the country by Bachelor’s Degree Center—and one of the country’s most affordable by University Headquarters. More than 95 percent of the program’s recent graduates were employed, or attending law school or graduate school within six months of graduation, Phillips said.

Just prior to serving as a Fulbright Scholar in January, Phillips will also teach an international service learning course for Daemen students where they will serve as volunteers for Human Rights Law Network. Those interested can contact the Daemen Global Programs Office.

In announcing the honor at the State of the University address, President Olson said, “This prestigious award is yet another instance of national distinction for the university.”