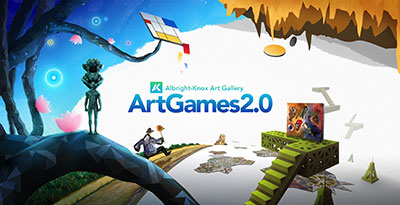 AMHERST, N.Y. – Buffalo’s Albright-Knox Art Gallery has launched a newly created interactive mobile gaming application called ArtGames 2.0 that links players with modern and contemporary works of art, which was developed through a unique collaboration with the Daemen College International Center for Excellence in Animation (ICEA) and Empire Visual Effects.

ArtGames 2.0 comprises fun and educational games that familiarize players with different art styles and movements, various artists and artistic concepts, and masterworks from the AK collection. Users will first enter the home environment—a 3-D interface updated in real-time—where they will have access to all ArtGames 2.0 portals. Each portal contains a different style of game that was designed around the artwork that inspired it.

“ArtGames 2.0, a brainchild of the Albright-Knox Innovation Lab, is a participatory and playful digital platform that connects the virtual world of youth-focused video and Internet games with revolutionary artworks,” said Dr. Janne Sirén, Peggy Pierce Elfvin Director of the Albright-Knox Art Gallery. “By harnessing the 21st century’s ubiquitous enthusiasm for video games and interactive experiences, ArtGames 2.0 invites young minds to engage with the drama of modern and contemporary art.”

Dr. Laura Watts Sommer, director of the Daemen Visual and Performing Arts Department, who collaborated on the project, said, “Introducing the game app ArtGames 2.0 represents a team effort that united expertise in video game design and consumption, art historical references and museum education to expand the audience of the museum’s exceptional collection.”

All Things Media in New Jersey also collaborated on the project, which included input from some of the artists whose works were sources of inspiration for individual games, such as Do Ho Suh and Jason Middlebrook. The application is available through the Apple App Store and Google Play Store.

“ArtGames 2.0 allows users to share their progress with the world by capturing an image of their own art-inspired planet.´ said Russell Davidson, AK Innovation Lab project manager. “These images can be shared through any social media channel with which the user engages and can even be distributed to friends and family through email from within the application. Players can also explore one another’s customized planets by navigating through a 3D galaxy. This application will allow museums to reach a broader audience as social media use continues to grow.”

“It was truly an honor to participate in the stimulating collaboration that led to ArtGames 2.0,” said Watts Sommer. “The project incorporated Daemen’s expertise in animation, art history and cultural practice. We look forward to seeing further expansion of this project in the months to come.”

Rob Spierenburg, managing director at All Things Media, also cited the teamwork that went into the project. “Every once in a while, a project comes along that is challenging, artistic, exciting, and fun,” he said. “ArtGames 2.0 is one of the best applications we have ever had the opportunity to develop.  It has been a privilege to work with the partners on this project to create such a groundbreaking game application and is the kind of project that brings out the best in a company like ours.”

Developed over the course of 18 months, ArtGames 2.0 is the first project undertaken by the AK Innovation Lab, which engages a broad-based series of intellectual collaborations across an array of disciplines in the arts, sciences and technology to explore new ideas and develop solutions to challenges confronting museums and societies locally, regionally and globally. The lab strives to define new models for museums as productive and engaged creative hubs at the center of social and civic vitality.