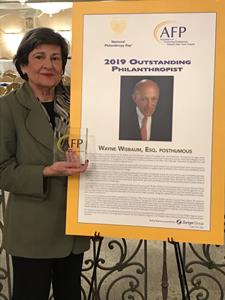 Wisbaum’s wife, Janet, accepted the award on his behalf at the celebration, which also recognized other 2019 Philanthropy Award recipients. National Philanthropy Day acknowledges individuals and organizations whose lifetime or long-term achievements have made a significant impact in the Western New York community.

“This award is a great tribute to Mr. Wisbaum’s legacy and passion for Daemen and his many years of leadership, contributions, and support to our college and other organizations throughout our region,” said Mary Glenn, vice president for institutional advancement. “As a philanthropist, he serves an extraordinary role model for all of us to make a positive difference in our community.”

Wayne Wisbaum, who passed away last December, and Janet have supported Daemen for more than two decades. Most notably, they have generously supported Daemen’s Center for Polish Studies, which has provided funding to bring key speakers to campus and enables many students and faculty to travel to Poland to work on academic and service learning projects. Their support has also had a powerful impact in other areas at the college, including student scholarships.

Outside of Daemen, Wisbaum was deeply committed to the Buffalo Philharmonic Orchestra and served as president of Kleinhans Music Hall Management, and he was known for leading the campaign that restored and saved the BPO’s historic concert hall.

He was also active with several other local organizations, including the Buffalo and Erie County Library, Buffalo Zoo, Burchfield Penny Art Center, Artpark, Irish Classical Theater Company, Planned Parenthood of Central and Western New York, Say Yes to Education, SUNY Buffalo State, and the United Way of Buffalo and Erie County. He also served as chair of the Foundation for Jewish Philanthropies.