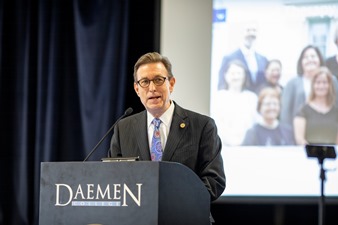 AMHERST, N.Y. – In his fall State of the College address on Sept. 26, Daemen College President Gary Olson noted that increased enrollment, major campus improvement projects, and other significant achievements are among the many signs of the college’s enduring strength and growth.

“As higher education continues to evolve both nationally and regionally, Daemen has remained strong and prospered on many fronts,” said Olson. “Our college has thrived because of our ability to adapt and be innovative while also providing our students a transformative educational experience made possible by our superior faculty and staff.”

In his address, Olson reported that this year’s entering class is Daemen’s largest in the past five years and includes a significant number of academically talented students. Graduate enrollment was reported to be particularly strong, having experienced a remarkable 43 percent increase compared to last year. Also, a 15 percent increase in enrollment is expected in programs offered at the college’s Brooklyn branch, a unique educational offering customized to fit the needs of the Orthodox Jewish community.

As part of Daemen’s ongoing campus improvement initiatives, Olson shared news of the successful completion of several renovation and construction projects done during the summer, including the next phase of upgrades to the college’s science facilities. To date, a total of $2.1 million in improvements have been made to science laboratories and classrooms.

Another recent notable project is nearly $1 million in refurbishments made to Curtis Hall, which will maximize the use of building for the college’s successful Institute for Government and Nonprofit, Innovation, Training, and Evaluation (IGNITE). Other recent enhancements include new student recreation space, campus apartment improvements, a makeover on the exterior of Lumdsen Gymnasium, and modernization of the women’s locker rooms.

"Over the past few years, we have taken many steps to build dynamic, modern spaces and have invested in improving the overall appearance of our campus.” said Olson. “All of these projects will enrich the Daemen student experience while creating a campus environment that will enhance student engagement and learning.”

Olson also reported that 95 percent of the $22 million goal has been reached for Daemen’s Drive to 75 campaign, the college’s first-ever comprehensive campaign.

“This achievement is a real tribute to all of us because it demonstrates that our friends and donors have great confidence in us and the tremendous momentum that the college has experienced in the last several years,” said Olson. “This historic campaign will set the stage for Daemen today and beyond, and build on our commitment to improve educational offerings, enhance campus facilities, and strengthen the college’s endowment.”

Turning to athletics, Olson praised the NCAA Division II teams for their many accomplishments over the past year and discussed several upcoming noteworthy events. The men’s basketball team will play in the Small College Basketball Hall of Fame Classic, the most prestigious early season tournament for Division II teams, and will also play two exhibition games against high profile Division I teams. Men’s basketball will also participate in a high-visibility double header at KeyBank Center, marking the first time the team will play at the downtown venue. In January, men’s volleyball will host matches against three Division I powerhouses.