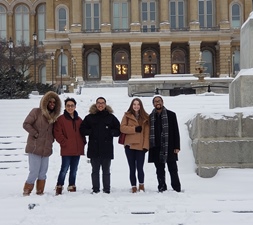 DES MOINES, Iowa – With the 2020 election year underway, a group of Daemen College students traveled to Des Moines to experience the Iowa Caucus first-hand and to learn about its essential role in the presidential election race.

The five political science and history majors were in Iowa from Jan. 16 to 21 during the final push by Democratic candidates before the caucus officially began on Feb. 3. Experiencing the caucus will be key to a semester-long student research project being overseen by Dr. Jay Wendland, associate professor of political science and an expert on presidential nominations, primaries, and elections.

“This experience was a rare opportunity for students to observe civic engagement in action on a national level and the incredibly significant part the Iowa Caucus has in choosing the Democratic Party’s candidate,” said Wendland. “Our country’s nomination process is uniquely American and not emulated in any other country in the world. Being at the caucus underscored this and showed students the importance of being politically engaged.”

While in Iowa, Daemen students had the chance to see “retail politics” in action, a traditional type of political campaigning in which candidates interact and talk directly with voters at locally-based events, explained Wendland. The Daemen students, who did not volunteer for any particular candidate, attended campaign rallies, town meetings, and grassroots events.

“Seeing the candidates in person at small venue events allowed students to develop a good understanding of how retail politics works in early presidential primary states,” said Wendland. “It also humanized the presidential hopefuls as they interacted with voters on a more personal level rather than at large-scale events.”

Political science major Carlos McKnight of Washington, D.C., who participated in the Iowa Caucus trip, noted, “It was interesting to see how passionate the Iowa voters are about caucusing and to have such easy access to all the candidates. This experience made me realize that politics isn’t only about statistics, strategy, polls, and benchmarks but there is also a very personal approach to campaigning.”

Other Daemen students who attended the caucus and are involved in the research project are political science majors Lindsey Hornung of Amherst, Ricardo Marquez of Los Angeles, and Sam Williams of New York, and history major Tysai Washington of Bronx.

Outside the campaign and grassroots events, the Daemen group attended a presentation by Walker McKusick, national director of Vote Smart, a nonpartisan organization that provides information on candidates and elected officials.

They also visited the Iowa State Capitol Building, where they met Iowa State Rep. Ako Abdul-Samad, who gave the Daemen group a tour of the building. In addition, they had the opportunity to meet Latino community advocate Mary Campos and former Iowa State Rep. Wayne Ford, founders of the Iowa Brown and Black Forum.

“Experiential learning opportunities like the Iowa Caucus experience helps students to connect classroom knowledge within the context of the real-world,” said Wendland, adding that the caucus research project is being supported by a Daemen Think Tank grant. “As a whole, observing the caucus gave students valuable insight into the presidential nomination process and will help them to become more educated voters.”

For McKnight, the Iowa Caucus trip “expanded my view on American politics and helped me to better understand the importance of the presidential primary process in our country. It was especially memorable and impactful to watch each candidate’s unique campaign style and to see them energize and excite the voters at their events to hopefully gain their support.”