Study Discovers Dinosaurs May Have Resorted to Cannibalism 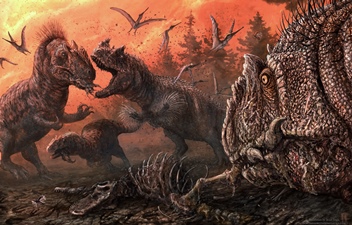 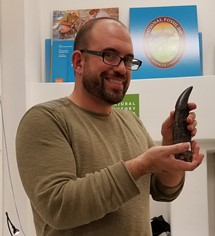 Dr. Domenic D’Amore is shown with a Tyrannosaurus Rex tooth.

Study Discovers Dinosaurs May Have Resorted to Cannibalism

AMHERST, N.Y. – Large Jurassic period theropod dinosaurs like Allosaurus and Ceratosaurus apparently turned to cannibalism when food was scarce, according to a new study co-authored by a Daemen College professor.

The research team looked for bite marks on more than 2,300 bones from Mygatt-Moore Quarry, a 152-million-year-old fossil deposit site in Western Colorado. Tooth-marked bones showed that huge flesh-eating dinosaurs likely scavenged the carcasses of other dinosaurs at times when food was not easily available during the late Jurassic period.

The study, which was co-authored by Dr. Domenic D’Amore, associate professor of natural sciences at Daemen, was recently published in the journal PLOS One. Dr. Stephanie Drumheller, a paleontologist at the University of Tennessee, led the study that also included researchers from Colorado Mesa University.

“Given the higher frequency of tooth-marked bones, we suspect that this was a very stressed ecosystem when these dinosaurs existed in ancient Colorado and scavengers would eat whatever they could find, including remains of the same species,” said D’Amore, an expert on using tooth marks to determine body size estimates for dinosaurs. “We were unable to tell exactly what species were marking up the Mygatt-Moore bones, but we can say many of these marks were made by something big. A few may have been made by theropods larger than any found at the site before.”

Of the thousands of bones examined, researchers found hundreds of bites, a rare find at a dinosaur fossil site. Bites were discovered as expected on meatier bones, such as ribs, but they were also found on tiny toe bones that are not the most nutritious. According to Drumheller, the study’s data painted a picture of an ecosystem where dinosaur remains laid out for months at a time and a succession of predators and scavengers would take a turn eating the carcasses.

“Scavenging, and even cannibalism, is pretty common among modern predators,” said Drumheller. “Big theropods, like Allosaurus, probably were not particularly picky eaters, if it meant they got a free meal.”

The reasons behind why there were so many bite marks on bones from the Mygatte-Moore site, which is managed by the Museums of Western Colorado and the U.S. Bureau of Land Management, is difficult to answer without similar research from other dinosaur sites for comparison. With the number of marks available for study, researchers were able to obtain details not available in smaller collections.

As an example, for the current study D’Amore figured out a way to use striated tooth marks on theropod teeth to determine body size estimates. “We can get a lot of information from even small tooth-marked bones,” said D’Amore. “This was the first find of potential cannibalism at the Myatt-Moore Quarry, which is a rather unique dinosaur fossil site. I hope this study will inspire others in the future to look systematically at small and fragmentary bones for marks.”

For D’Amore, he plans to incorporate the research study into the “Dinosaur Paleobiology” course he teaches at Daemen every other spring semester.

“Being involved in this dinosaur study was an amazing experience I’m excited to share with my students, and it will give them first-hand insight on fascinating research about the existence and behavior of dinosaurs,” he said.

Dr. Domenic D’Amore is shown with a Tyrannosaurus Rex tooth.