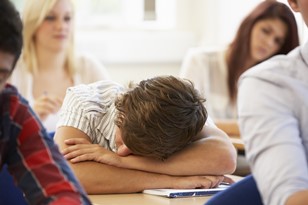 AMHERST, N.Y. – Teens who are not getting sufficient sleep are more likely to suffer from symptoms of depression, a result that can be mitigated when parents enforce bedtimes with adolescent children, according to new research led by a Daemen College professor.

The study, funded by the National Sleep Foundation, will be published in the journal Sleep, a publication of the Sleep Research Society and the leading journal in the field of sleep science.

“Our study suggests that inadequate adolescent sleep is associated with symptoms of depression and higher levels of daytime sleepiness and fatigue, which in turn may impact the overall health of teens,” said Dr. Jack Peltz, assistant professor of psychological sciences at Daemen and lead author of the study. “These findings underscore the importance of adolescents getting adequate amounts of sleep to support their well-being and emphasizes the positive influence parents can have by establishing a set bedtime and rules that will help ensure their teens will get more sleep.”

For the current study, teens self-reported on their daily sleep duration, energy levels, and symptoms of depression throughout the day. Parents completed assessments on enforcement of bedtime-related rules and routines, such as establishing a bedtime, regulating screen time, and prohibiting caffeine consumption.

Researchers found that although the majority of families in the study reported they have bedtime rules, 47 percent of parents did not have an enforced bedtime, 30 percent did not have pre-bedtime rules for screen usage, and 48 percent had no enforced rules regarding afternoon or evening caffeine consumption. All are known factors in influencing the quality and length of sleep among teens.

In addition to the recent study findings on depression, poor sleep has been previously linked to having a number of other adverse effects on teens, including poor physical health, academic failure, and increased risk for automobile accidents.

On average, teens need 8.5 to 9.5 hours of sleep, but more than half of teens ages 15 to 17 get only 7 hours of sleep a night, according to the National Sleep Foundation’s 2014 Sleep in America Poll, the most recent poll available. Also, the poll showed that approximately 25 percent of parents of 15-to-17-year-olds do not have formal sleep-related rules and only 35 percent of parents enforce bedtime rules.

Peltz pointed out that sleep patterns change during adolescence and teens have a biological tendency to sleep later, making later high school start times beneficial to adolescents’ sleep and their level of alertness and well-being. However, only 14 percent of high schools in the U.S. have moved to later school start times. Other areas, including media consumption and poor sleep practices, are also negatively impacting adolescent sleep.

“Sleep is essential to teens’ physical and mental health, but adolescents are likely going to give pushback about setting a bedtime as they are at an age where they are becoming more independent,” said Peltz. “For parents, enforcing a bedtime and a regular routine will be well worth the effort in helping their teens get sufficient sleep and develop healthy sleep habits.”

Other co-authors of the study, “Parents Still Matter: The Influence of Parental Enforcement of Bedtime on Adolescents’ Depressive Symptoms,” are Dr. Heidi Connolly and Dr. Ronald Rogge, both of the University of Rochester.