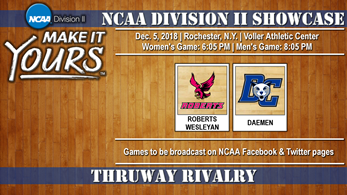 AMHERST, N.Y. - The men’s and women’s basketball doubleheader between Daemen College and Roberts Wesleyan College at the Voller Athletic Center on Wednesday, Dec. 5 has been selected to be part of the NCAA Division II Basketball Showcase Games for the 2018-19 season. In an agreement between the two institutions, the NCAA and its media partner, Niles Media Group, both games that evening will be broadcast live on the NCAA Facebook and Twitter pages, as well as on the East Coast Conference Network.

The NCAA Division II Basketball Showcase Games are part of a larger initiative launched by the NCAA earlier this fall, aiming to broadcast 11 football games, 18 basketball games, and six to 10 additional sporting events in a hybrid model that would allow for distribution on local television stations and online. Niles Media Group will send a production truck and full crew to broadcast the Thruway Rivalry doubleheader, with game times slated for 6:05 p.m. (women’s) and 8:05 p.m. (men’s).

Both games feature rematches of opening round contests from last season's East Coast Conference Championship tournament, and both are the ECC season openers for all four squads involved.

On the women’s side, Daemen holds a 33-24 advantage in the all-time series, but Roberts Wesleyan has won four straight and seven of the last eight meetings, including a 76-64 final in conference tournament play last season, spoiling the Wildcats’ first-ever postseason berth at the Division II level. The teams also played an epic, three-overtime thriller at the Voller Athletic Center last January with RWC claiming a 97-91 win. Six of the last nine meetings have been decided by eight points or less.

The Daemen women have opened the season with two wins in their first five contests. They play a non-conference game tonight at Gannon University. The Wildcats were picked eighth in the ECC preseason poll. Roberts Wesleyan, which hosts Chestnut Hill College on Saturday, has started 3-2 this season after being picked fourth in the ECC preseason poll.

The men’s series has been dominated by Daemen of late. The Wildcats have claimed wins in 15 straight and 22 of the last 23 meetings. The Daemen streak also includes 11 straight wins at the Voller Athletic Center. After a 25-point win (98-73) in the teams’ first meeting last season, things tightened up as the Wildcats won by seven (77-70) and six points (75-69) in the final two meetings, the last of which came in conference tournament play at Daemen’s Lumsden Gymnasium.

The Daemen men are off to 4-1 start this season. Expectations are high as the Wildcats return 13 players from their 2017-18 team, which went 22-8 overall. The Wildcats were picked second in the ECC preseason poll, have garnered votes in several national polls, and are currently ranked sixth in the Division II Sports Information Directors of America (D2SIDA) East Region media poll. RWC, which made their first ECC Championship appearance last season, is 3-2 in the early going after being picked sixth in the ECC preseason poll. The Redhawks visit American International College this Saturday (Dec. 1) before prepping for Daemen.

Stay tuned to daemenwildcats.com for further information on the NCAA Division II Basketball Showcase Games as the doubleheader draws near. Tickets for the game can be bought the day of the event at the RWC ticket counter ($5 general admission, $3 seniors 65+, $2 visiting students with school ID, $2 children 5-12).