Associate Professor of Theatre, Director of Visual and Performing Arts

Robert Waterhouse received his Ph.D. at the University of Buffalo and has been teaching for the past 20 years. He has directed over 50 professional productions in the United States and England. Dr. Waterhouse has held numerous positions with professional theatres, among them Atlanta's Academy Theatre - as designer and program director with at-risk and for disadvantaged youth and the Kavinoky Theatre - as Associate Director.

Dr. Waterhouse is currently Artistic Director of Buffalo's New Phoenix Theatre, has won a number of awards for his productions, and has toured internationally. He is a member of the Society of Stage Directors and Choreographers, and remains active in London, England where he grew up.

Associate Professor Christian Brandjes is the Artistic Director of the Buffalo Soundpainting Ensemble, a collaborative ensemble that conducts performance experiments with non-linear narrative, ensemble scripting and its relationship to improvisation. He has been a member of Actor's Equity Association since 1993, and has performed extensively in the regional theater as well as in several professional ensembles. He was a company member at StageWest, a LORT C regional theater in Springfield, Massachusetts for three years, where he was company instructor in the Suzuki Method of Actor Training. He left StageWest to become a founding member of the Blue Hill Performance Ensemble in the Berkshires of Massachusetts, with Eric Hill, the Artistic Director of StageWest.

He has taught the Suzuki Method of Actor Training at U. Mass Amherst, Hampshire College and Brandeis University, and Improvisation at the American Musical and Dramatic Academy, Daemen College and the New York City public schools.

He has been Soundpainting with Walter Thompson since 1998, when he was introduced to the language through his work with the Irondale Ensemble Project, an off-Broadway, Equity ensemble that focuses on improvisation and political theater. He continues to perform and record with the WTO.

Professor Brandjes and the Buffalo Soundpainting Ensemble are currently engaged in a telematic project through "Beyond/ In Western New York". Their project was accepted after a rigorous selection process for this event, and will be performed at the Burchfield-Penney Gallery in January of 2011. The project will be a live telematic collaboration with American and European ensembles and will involve a collision of the following texts:WIELAND, by Charles Brockden Brown, THE HUMAN DRIFT by King Camp Gillette, DESERTS by Edgard Varese and THERE IS NO MORE FIRMAMENT by Antonin Artaud.

Brandjes has performed extensively since relocating to Buffalo from Brooklyn, New York, performing in Who's Afraid of Virginia Woolf, Good, Long Day's Journey Into Night, Hedda Gabler, Observe the Sons Of Ulster Marching Towards the Somme, Accidental Death of an Anarchist and Blithe Spirit at the Irish Classical Theater Company, Twelve Angry Men at the Kavinoky Theater, The Seafarer and Freud and the Sandman at the New Phoenix, with Daemen College Assistant Professor Dr. Robert Waterhouse, and most recently in My Fair Lady at MusicalFare Theater on Daemen College campus.

Ken entered the professional world of animation as an animator and digital artist with the acclaimed video games studio Andrew Spencer's. This studio became a launching pad for a distinguished and well-rounded career in the commercial fields of video games, television production, and film. Ken's film credits include C.S. Lewis' Prince Caspian and Hell-Boy 2, directed by Guillermo Del Toro. Video game titles include the film franchise, Reign of Fire for Disney and Transformers - Fall of Cybertron for Blizzard Studios. Ken has worked at all levels of production including lead and supervisor roles on numerous projects and his work has taken him to several international destinations such as London, Scotland, Montreal, Ireland and the United States.

Professor Doyle has worked at some of the world's most prestigious studios for animation production including Frame-store, Double Negative, MPC and Lion-Head studios. Apart from animation, Ken's creative interests lie in the areas of 2D digital concept art and traditional portrait drawing.

Jones is a veteran of major Hollywood animation studios such as Disney, DreamWorks and Cartoon Network. He taught character animation at CalArts and produced an Annie Award-winning documentary.

Kevin Kegler is the Director of Graphic Design and Professor of Graphic Design who received his BA from Buffalo State College and his MA from the University of Buffalo. In addition to graphic design, Professor Kegler has taught a graduate level Arts Administration course at Daemen College and has also taught courses in London, England and Progresso Dos, Dominican Republic. He is active in the community and has served on several boards of nonprofits in Western New York.

Professor Kegler lives in Buffalo and has been an active artist in Western New York for over 30 years. His paintings, sculpture and constructions have been exhibited in many regional galleries and museums including the Burchfield Penney Art Center, The Albright Knox Art Gallery, Hallwalls, CEPA, Meibohm Gallery, Indigo and Art Dialogue. In addition he has exhibited in Berlin, the KK Outlet Gallery in London and with "Interactive Currents" SCUT Guangzhou, China.

Casey Kelly is a practicing designer and brand strategist with more than ten years of experience in advertising, marketing, and design. Along with teaching, she practices through her consultancy, Buffalo Design Studio. Kelly is a board member and education chair for American Advertising Federation of Buffalo. She incorporates practical, industry-leading standards in the classroom and connects students with the industry through experiences and projects. Prior to Daemen, Kelly worked at the GRAMMY winning brand design studio, White Bicycle, where she led design and project management for a broad range of clients during her six year tenure. Prior to White Bicycle, she worked at agencies Crowley Webb, and Cenergy. Kelly specializes in strategy, branding and identity design, and web/UX design. Clients that she has created work for include SONY, Cleveland Cavaliers, Softlips, Comcast, Andrew Bird, Alanis Morrissette, Delaware North Companies, 43North, Burchfield Penney, and M&T Bank, among others. Kelly earned a master of fine arts at Rochester Institute of Technology. She earned her bachelor of fine arts in graphic design from Daemen. She makes and sells jewelry through her startup Pretty and Grit.

Brian Hammer teaches art courses for non-art majors, survey of the history of art from ancient to medieval periods, and a survey on non-western art and culture of Africa, India, China, and Japan. He received his B.S. in Art Education from Daemen College in 2002 and his M.A. in Art History from the University at Buffalo in 2008.

Brian’s interests include American art from the 1940's through the 1960's. His M.A. thesis focused on American sculptor, Richard Serra, his work Tilted Arc, and its ability to alter space not only physically but conceptually as well. Brian’s interests also include the art and archeology of the Aegean and Greece. He has worked on several archeological projects, including, the Galatas Survey in Crete (2005-07), the Kourion Mapping Project in Cyprus (2007), and is presently working on the Gournia excavation in East Crete.

Mr. Shanahan is the co-founder and Artistic Director of Torn Space Theater where he has directed over thirty works for the stage, many of which were U.S. and area premiers. He has written and produced several original works for the stage including, Terminus, Architect, STIVALE, AREA, TRACE, Motion Picture and STOREHOUSE. Mr. Shanahan was awarded Best Director for his stage direction of his original work Terminus and for Tennessee William’s A Streetcar Named Desire; Terminus also received Best Production of WNY, Buffalo Spree Magazine. His work in site-specific theater and community engagement was cited in The Buffalo News where it was written, “thanks to the work of pioneers like (Ani) DiFranco, Shanahan and Joanna Angie, the city is now entering a new and far grander phase of the adaptive reuse revolution (Colin Dabkowski)." Mr. Shanahan was recently referred to as the “city’s de facto king of site-specific performance” (Donna Holke) in the nationally distributed magazine The Dramatist and he was featured as a “Game Changer” by Buffalo Spree Magazine.

The Buffalo News described his recent work, STOREHOUSE at Silo City, as “ an explosion of the definition of ‘theater." And "More than perhaps any other production in the company’s storied history of pushing boundaries and defying definitions, [STOREHOUSE] forces viewers to rethink and expand their own ideas of what theater or performance can be."

Dan wrote and directed, Motion Picture, a site specific performance in 2013. The project received national attention, representing Buffalo in The Atlantic’s article entitled “The Best Thing My City Did Last Year”. The work was described "as a powerful example of the artist’s role in reactivating and imagining new public spaces” (Buffalo News); and was hailed as “by far the most visually ambitious and inventive piece of theater I’ve seen” by Colin Dabkowski of The Buffalo News. The production was featured in the national journal PAJ: A Journal of Performance and Art

In 2014 Torn Space Theater was nominated for Organization of the Year in ASI’s Cultural Awards, recognized among over a hundred organizations as one of three finalists along with the Buffalo Philharmonic Orchestra and Squeaky Wheel Buffalo Media Resources.

Dan lives in Buffalo’s West Side with his wife Melissa, son Ford and daughter Vaughn.

Laura Watts Sommer earned her PhD from Temple University with her thesis Francesco Hayez and the Byronic Influence on Italian Romantic Painting (1999). Her articles include "Italian Romanticism and Academicism in an Unidentified Rest on the Flight into Egypt" for the Gazette des Beaux Arts (2002), "Shifting Identities: Politics, Poetry and Passion in Italian Nineteenth‐Century Portraiture" for Visual Resources (2007), and "Regionalism and Ruskin in the Ottocento Art Historical Narrative," a chapter in the 2012 anthology Ruskin, Venice, and Cultural Tourism. Her most recent project is a manuscript on the effect of Regionalism on the Ottocento art historical narrative.

Professor Sommer teaches classes on theory and methodology in the Modern and Contemporary eras. 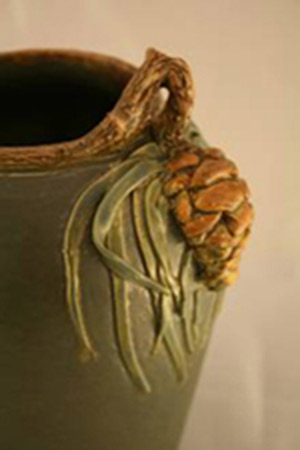 Steven Appler has served as an adjunct instructor with Daemen College since 1996. Mr. Appler studied Ceramics and Art Education at Edinboro University of Pennsylvania and SUNY College at Buffalo graduating with his M.S. in Art Education in 1994. Steven is the Secondary Instructor of Ceramics and middle school art teacher for the Amherst Central School District.

Steven Appler is a practicing professional potter, specializing in wheel-thrown, hand-built and decorated ceramics. Professor Appler has exhibited his work in shows both nationally and internationally.

He is currently the proprietor of Industry Standard Antiques, specializing in industrial and mid-century modern design.

Mark B. Griffis has been an adjunct instructor within the Visual and Performing Arts Department at Daemen College for the past twelve years.

Mark graduated from Buffalo State College with his BS in Education and holds his Arts Honors Specialist from the University of Western Ontario located in London, Ontario.

Mark plays a large role in the Ashford Hollow Foundation which owns and operates the Essex Arts Center and Griffis Sculpture Park. Mark has been the director of the Essex Arts Center, located of the West Side of Buffalo, which has thirty studios and also provides a broad spectrum of educational art programs for thousands of students throughout Western New York. Mark also assists in the operating of Griffis Sculpture Park, located in East Otto, New York, a 450 acre arts and nature preserve with 250 monumental sculptures and ten miles of hiking trails.

Mark also has an extensive background as an actor. Mark was featured in hundreds of commercials including Crest Toothpaste, Amstel Beer, Eggo Waffles, Cadillac, Black and Decker, Red Rose Tea, and Ford Trucks. He has also appeared in several television shows and movies. 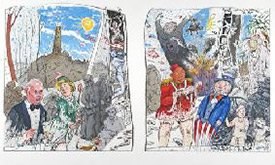 James Allen, Professor Emeritus, has taught drawing and painting at Daemen College for over forty years. He holds a BFA from the University of Notre Dame, and an MFA from Wayne State University.

Professor Allen has exhibited his work in venues across the United States and in Canada, winning awards and purchase prizes in regional and national exhibitions. His two most recognizable idioms are the installations of large figurative cut-out paintings and his "American Folk Tale" series of multi-media drawings. Allen's work can generally be described as a meditation on the affections, fears, and obsessions of contemporary American society. 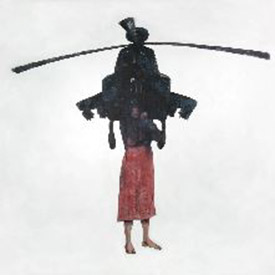